When the moving liquid, gas, dust and other media in the pipeline are stressed, the pressure of the sealing lip attached to the surface of the pipe body is also strengthened. With the aid of the structure of the device, not only the leakage of the medium in the pipe is hindered, but also the overall sealing performance of the pipe is guaranteed.

During compression, according to the basiger principle of hydrodynamics, in the case of sealing, there is a normal pressure equal to the internal pressure at every point of contact with the medium, so the lip bottom of the sealing ring is axially compressed, the lip is axially compressed, the contact surface between the sealing lip and the pipeline is widened, and the contact pressure is increased, so as to achieve the self sealing effect, as shown in Figure1.

Under the action of pressure, the sealing surface and the pipeline are closely connected, which can effectively ensure the sealing. It can be seen from the actual working conditions that the seal ring is mainly static seal, and the relatively harsh working conditions are mainly small vibration and impact vibration. According to the characteristics of Y-type seal, the seal ring can bear the dynamic seal of more than 20MPa.

The shell is the main pressure bearing part of the pipeline connector, which directly affects the safety and reliability of the actual use. It is necessary to conduct in-depth structural mechanics analysis to determine whether the strength of each stress point under the rated working pressure meets the use demand, find out the stress concentration point, and make corresponding modification and improvement, so as to ensure the safety and reliability.

The strength of the shell is related to the tensile strength, ductility, thickness and other factors of the materials used. The clamping force of the bolts used will cause certain deformation of the shell. In addition, the lip of the shell will also deform under pressure. These factors are factors that affect the pressure resistance, safety and reliability of the shell.

The finite element model of the shell is established, as shown in Figure2. 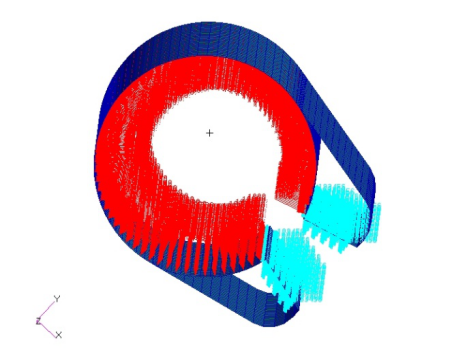 The two ends of the joint adopt the ingenious clasp structure. After the installation, the clasp on the tooth type fixed ring tightly bites the surface of the pipe. When the pressure inside the pipe increases or the axial force increases due to the influence of external force, the clasp will tighten the pipe body